While we're still unable to welcome you into our house, we're excited to present another series of WCL House Concerts with a nod to the centuries-old tradition! We've invited some of your favorite artists from the Philly area, many of whom have played our stages countless times over the years, to share their music virtually. These intimate livestream concerts will premiere on our YouTube channel, directly from the artists' homes to yours – except for the final performance by Swift Technique, which will be recorded from The Music Hall at WCL to coincide with our Curbside Beer Fest Pop-Up!

Brooklyn based – Philly born, Naeemah Z. Maddox is a singer-songwriter, composer, and multi- instrumentalist. Naeemah’s hybridized style draws from many elements including classical arrangement, R&B vocals, lush jazz harmonies and rock edge and rhythms.  Vile Tyrant and the MiddleMen (VTMM), Naeemah’s most recent full length album, is a fusion of chamber pop, progressive rock and soul, blended into a unique and original style.

Naeemah composed ,produced and recorded nearly all of the instruments including  guitars, flutes, violins, keyboards, vocals, drum programming and bass on two of the nine tracks.

Five years in the making, this concept album serves as a statement analyzing the effect of mankind’s struggles on a Macro (political) and Micro (personal )level. Enhanced with the visual images created by artist Lindsey Wavrek,  The result is an album that blurs and bridges the lines between Progressive Chamber pop and soul infused rock.

Naeemah has also released a new  chamber pop single entitled “Just like Flying”, along with a music video, in December of 2020.

In addition to performing her original music, Naeemah performs with other artists/musicians in the community. More recently,  Naeemah is a featured vocalist on Lamb of God guitarist, Mark Morton’s solo album “Anesthetic”, and on the antiracist  single “The Burnt Offerings” released in June 2020.

Naeemah is gearing up for  a new album release in the Spring of this year. 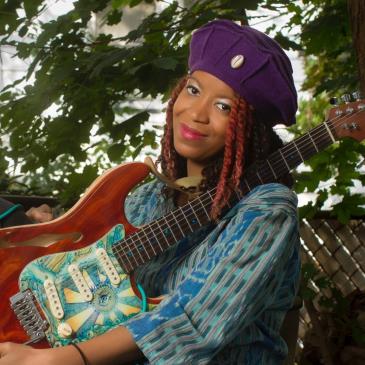