Worship My Organ will be taking place from  8:00 PM til 1:45 AM on the night of Sunday April 26th 2020. This show is a JazzFest tradition, ONLY brought to you by the BooM BooM RooM presents, creating an array of sounds, and you can only catch this cast of all star musicians performing together at this very show. This epic show always sells out, so get your tickets NOW!


NIGEL HALL
Soul provider Nigel Hall is in many ways an artist who needs no introduction. An in-demand sideman, he’s built a mighty foundation of funk over the years onstage and in the studio with collaborators including the Warren Haynes Band, Jon Cleary, Soulive, Oteil Burbridge and Roosevelt Collier, Ledisi, the Soul Rebels, Lettuce and countless others. Legions of fans are already well in the know about Hall’s copious keyboard chops and powerful vocal style. But even to them, his Feel Music/Round Hill debut solo album will be a revelation – a confirmation that Hall has stepped out front and center into a creative space to call his own.


SKERIK
Skerik is an American saxophonist from Seattle, Washington. Performing on the tenor and baritone saxophone, often with electronics and loops, Skerik is a pioneer in a playing style that has been dubbed saxophonics. He has performed with Les Claypool, Garage-A-Tois and more!


DJ LOGIC
DJ Logic is a turntablist active primarily in nu-jazz/acid jazz and with jam bands. Kibler was born and raised in The Bronx. An early interest in hip hop led to his using the turntables, practicing often. He has performed as a guest of Ratdog, Medeski Martin & Wood. 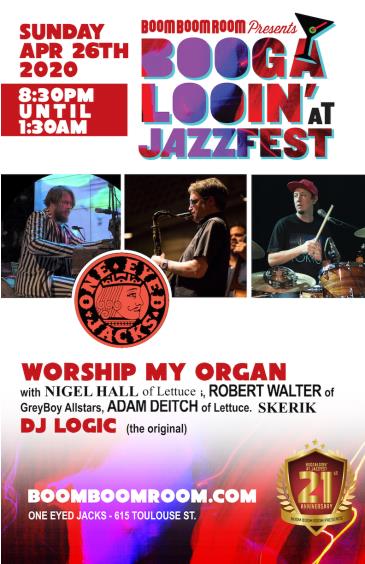