Waka Flocka is one of the most influential rappers living today. Combining aggressive rap lyrics with hyphy beats produced only by the biggest Atlanta producers alive, Waka Flocka Flame is a champion among southern hip hop artists. As part of 1017 Brick Squad headed by ATL legend Gucci Mane, Waka Flocka has established himself as a dominating force within the trap alongside Migos, OJ da Juiceman, and Young Thug. With anthems such as “Hard in da Paint,”  “No Hands,” and “Grove St.” it is impossible for the crowd to stay quiet during his shows.

New York legend DJ Whoo Kid is making an appearance with Waka Flocka. Known for his wrap sheet of collaborations with hip-hop heavy hitters 50 Cent, Snoop Dogg, and G-Unit, Whoo Kid is a legend that has proven himself to be one of the best MCs in the game. Also known as The Mixtape King, DJ Whoo Kid’s watermark in his productions has resonated in the ears of hip-hop lovers everywhere.

PIONEER STAGE PRESENTED BY "NO INVITE" 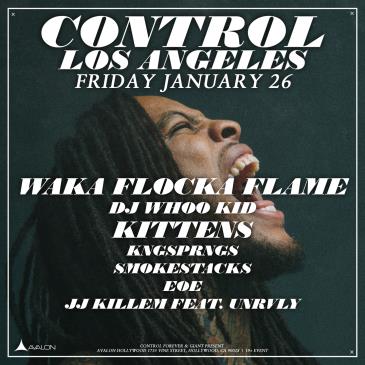