Waka Flocka Flame, known also as just Waka Flocka, is a chart-topping rapper who rose to fame following the release of his 2009 hit, “O Let’s Do It.” He continued to gain attention with the release of his two hits “Hard in da Paint,” and “No Hands.” “No Hands” reached the top spot on the Billboard Hot Rap Songs chart and the No. 13 spot on the Hot 100 chart in 2010. He also won a BET Hip Hop Award for Best Club Banger for the song the next year. All three songs were on Waka Flocka’s debut album, “Flockaveli.” Two years later, he released his sophomore album, “Triple F Life: Friends Fans & Family.” The album reached the No. 1 position on the Billboard Rap Albums chart. Waka Flocka has continued to release EPs and singles and working with industry greats such as T.I., Drake and Nicki Minaj. His next album, Flockaveli 2 is expected to be released soon.

Under 21 NOT PERMITTED. A valid state picture ID is REQUIRED for entry. Ticket holders that are under 21 or that do not have proper ID will be considered in violation of the terms of agreement which will result in denial of entry and no reimbursement will be given. 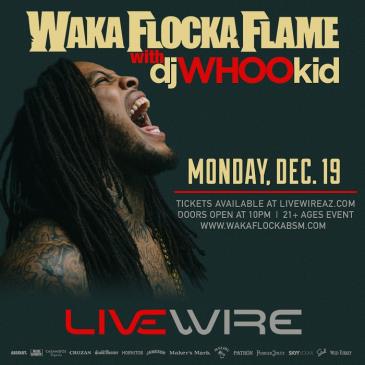