ALL AGES (Children 2 & under free)

What do we hold on to from our past? What must we let go of to truly move forward?

Waxahatchee’s Katie Crutchfield, a lyricist who has always let her listeners know exactly where she is at a given moment, spent much of 2018 reckoning with these questions and revisiting her roots to look for answers. The result is Saint Cloud, an intimate journey through the places she’s been, filled with the people she’s loved.

Written immediately in the period following her decision to get sober, the album is an unflinching self-examination. From a moment of reckoning in Barcelona to a tourist trap in Tennessee to a painful confrontation on Arkadelphia Road, from a nostalgic jaunt down 7th Street in New York City to the Mississippi Gulf, Crutchfield creates a sense of place for her soul-baring tales, a longtime staple of her storytelling.

This raw, exposed narrative terrain is aided by a shift in sonic arrangements as well. While her last two records featured the kind of big guitars, well-honed noise, and battering sounds that characterized her Philadelphia scene and strongly influenced a burgeoning new class of singer-songwriters, Saint Cloud strips back those layers to create space for Crutchfield’s voice and lyrics. The result is a classic Americana sound with modern touches befitting an artist who has emerged as one of the signature storytellers of her time.

From the origins of her band name—the beloved creek behind her childhood home—to scene-setting classics like “Noccalula” and “Sparks Fly,” listening to Waxahatchee has always felt like being invited along on a journey with a steely-eyed navigator. On Saint Cloud, Crutchfield adds a new sense of perspective to her travels. Reflecting on this, she says, “I think all of my records are turbulent and emotional, but this one feels like it has a little dose of enlightenment. It feels a little more calm and less reckless.”

Many of the narratives on Saint Cloud concern addiction and the havoc it wreaks on ourselves and our loved ones, as Crutchfield comes to a deeper understanding of love not only for those around her but for herself. This coalesces most clearly on “Fire,” which she says was literally written in transit, during a drive over the Mississippi River into West Memphis, and serves as a love song to herself, a paean to moving past shame into a place of unconditional self-acceptance. Coming from a songwriter long accustomed to looking in other directions for love, it’s a stirring moment when Crutchfield sings, “I take it for granted/If I could love you unconditionally/I could iron out the edges of the darkest sky.”

Which is not to say that Saint Cloud lacks Crutchfield’s signature poetry on matters of romantic love. Still, her personal evolution in this area is evident too, as this time around, Crutchfield examines what it really means to be with someone and how it feels to see our own patterns more clearly. On “Hell,” she sings: “I hover above like a deity/But you don’t worship me, you don’t worship me/You strip the illusion, you did it well/I’ll put you through hell.”

Crutchfield also looks at what it’s like to be romantically involved with another artist, someone in search of their own truth, on “The Eye”: “Our feet don’t ever touch the ground/Run ourselves ragged town to town/Chasing uncertainty around, a siren sound” and “We leave love behind without a tear or a long goodbye/as we wait for lightning to strike/We are enthralled by the calling of the eye.”

And of course, even when Crutchfield is taking a more nuanced approach to love, her ease with all-encompassing sentiments is still clear, with lines like “I give it to you all on a dime/I love you till the day I die” which sound culled from a classic torch song.

Over the course of Saint Cloud’s 11 songs, which were recorded in the summer of 2019 at Sonic Ranch in Tornillo, TX, and Long Pond in Stuyvesant, NY, and produced by Brad Cook (Bon Iver, Big Red Machine), Crutchfield peels back the distortion of electric guitars to create a wider sonic palette than on any previous Waxahatchee album. It is a record filled with nods to classic country (like the honky tonk ease of “Can’t Do Much”), folk-inspired tones (heard in the confessional lilt of “St. Cloud”), and distinctly modern touches (like the pulsating minimalism of “Fire”).

To bolster her vision, Crutchfield enlisted Bobby Colombo and Bill Lennox, both of the Detroit-based band Bonny Doon, to serve as her backing band on the record, along with Josh Kaufman (Hiss Golden Messenger, Bonny Light Horseman) on guitar and keyboards and Nick Kinsey (Kevin Morby, Elvis Perkins) on drums and percussion. Bonny Doon will also perform as Crutchfield’s live band during her extensive tours planned for 2020, which include the US and Europe.

Saint Cloud marks the beginning of a journey for Crutchfield, one that sees her leaving behind past vices and the comfortable environs of her Philadelphia scene to head south in search of something new. If on her previous work Crutchfield was out in the storm, she’s now firmly in the eye of it, taking stock of her past with a clear perspective and gathering the strength to carry onward.

Liam Kazar makes joyful rock songs so irresistible they feel timeless. Just ask Jeff Tweedy. “I love everything about Liam. His voice, his songs, the way he plays instruments, his smile, his cooking... Everything,” says Tweedy. ”Whenever I hear one of his songs for the first time I almost immediately start thinking to myself, ‘oh yeah! This song! I love this song.’ It’s a magic trick very few people can pull off: making something brand new sound like a cherished memory.” But on Kazar’s debut album Due North, out August 6 via Mare Records, the LP’s 10 tracks are full of so much charm, wit, and heart it can’t be a sleight of hand.

The Kansas City-based, Chicago-raised musician and acclaimed chef/founder of the Armenian pop-up restaurant Isfahan, describes the making of Due North as a personal revelation, where the more he wrote the more his songs showed what kind of artist he’s always wanted to be. While he’s consistently been a dream bandmate over the past several years, performing with artists like Tweedy, Steve Gunn, Daniel Johnston, and more, making his own songs presented a chance to finally find his own voice. But figuring out how to step out was a rewarding challenge. “This record kind of all stemmed from a conversation I had with Jeff,” says Kazar. “I showed him some of my earliest songs I was working on and he told me, ‘It sounds like you're writing for the people in your bands, you're not writing for yourself.’ He was completely right. I was not writing songs for myself.” With that needed insight, Kazar decided to start from scratch and write songs that felt like himself.

Single “Shoes Too Tight” was a clarifying moment for Kazar in this journey. Originally a slower acoustic ballad, Kazar slowly tinkered with a synth sound and happened upon the song’s bouncy chord progression. “That was probably the closest to an aha moment that I had of ‘Oh, this is me and this is what I'm into,’” says Kazar. The finished product is an undeniable jam with a swaggering exuberance that channels Richard Swift and David Bryne. Soon after, Kazar switched gears for the yearning and delicate “On a Spanish Dune” which showcased his emotional resonance as a writer. With lush synths and wistful acoustic guitars, he sings, “Everybody's asking me What you gonna do, gonna be I couldn't tell you if I tried I'm just a poem with an open line.” Though completely different songs, Kazar used these two earliest offerings as guides for what would come next. “ Those two songs were my North Star that I was following for this album,” says Kazar. “This is what it sounds like when I write for me.”

“There were two words I had in my head during the making of this record, which was joyful and vulnerable,” says Kazar, citing Al Green’s 1978 The Belle Album as an LP that encapsulates such a feeling. “I was trying to talk about things that I'm scared about but acknowledging that I'm not that powerful and you can still be joyful in the face of your own insecurities.” Take album highlight “Frank Bacon,” where Kazar sings, “When you’re running uphill and swimming upstream Nothing’s ever gonna be the way it seems.” Despite any lyrical uncertainty the track is bursting with life, especially in the monster groove from drummer Spencer Tweedy and bassist Lane Beckstrom. Elsewhere on “Nothing To You,” Kazar finds the sweet spot between indie rock jangle and subtle country twang as he sings, “I hope you don’t resent The love between your hands.”

Along with Tweedy and Beckstrom, Kazar enlists keyboardist Dave Curtin (Woongi), co-producer James Elkington on pedal steel, as well as Ohmme and Andrew Sa on backing vocals. Opener “So Long Tomorrow” showcases the band’s chemistry, a winding jam full of playful and soulful instrumental flourishes. One of the last songs written for the album, it was recorded remotely in quarantine but despite the distance the band’s tight bond is obvious. “These songs totally blew me away the first time I heard them: they sound like David Bowie meets the Band,” says Mare Records co-founder Kevin Morby. Due North was mixed by Sam Evian at his Flying Cloud Recordings Studio in upstate New York. “Sam knew exactly what I'm trying to do with this record,” says Kazar. “He put the whole track listing together and really had a vision for the record that I needed at that time.”

Like most musicians, the pandemic threw Kazar for a loop, knocking out both his touring revenue and his part-time gigs as a bartender. With more than enough time in his Kansas City home, he decided to pursue his longtime love of cooking by creating the restaurant, Isfahan. With recipes that honor his Armenian heritage and his family’s journey to the United States from Iran, Syria, and Lebanon, Kazar’s cooking has received press from Time Out Chicago and Eater. “In COVID, my mantra was to not have my heart broken about the future and be present,” says Kazar, explaining that ethos is one of the reasons why he named the LP Due North.

Though Due North is full of songs that act as a mirror to Kazar’s many talents, few sum it up as concisely as “No Time For Eternity.” On the track, he and Chicago country crooner Andrew Sa sing over wailing pedal steel, taking stock of the most important things in life: “Making time to live my life Making time for you and me.” “The reality of my life is that when I come home, and I'm talking with my partner, maybe we had a bad day, but we still are laughing and having a good time with each other at the same time,” says Kazar. “I had to make music that expressed that part of me that’s a person who genuinely enjoys themselves.” 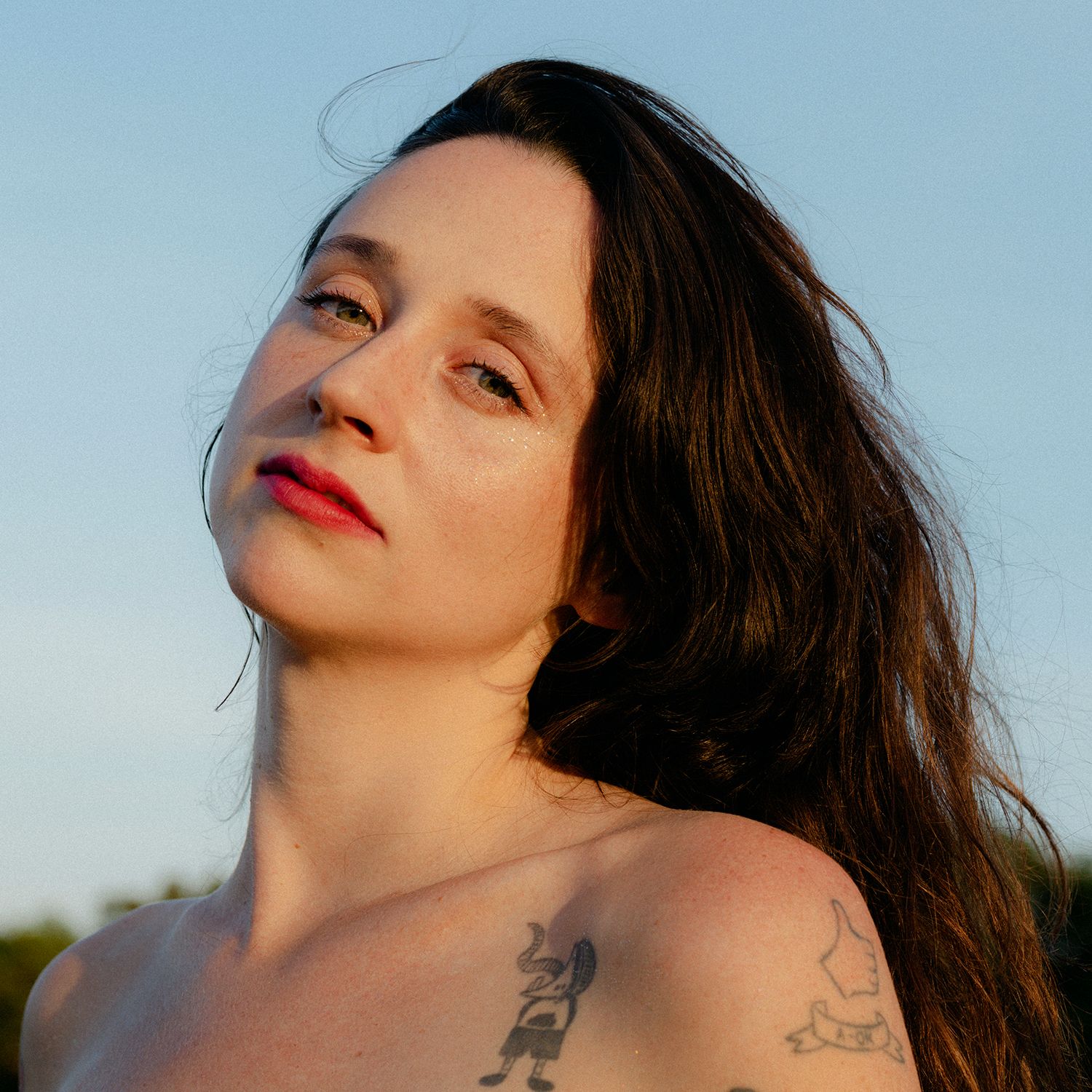