We Were Promised Jetpacks with Frankie Rose at Underground Arts

We Were Promised Jetpacks – Enjoy The View

Since releasing 2018’s ‘The More I Sleep The Less I Dream’, We Were Promised Jetpacks’ Adam Thompson, Sean Smith and Darren Lackie have embraced change head-on. Amicably parting ways with guitarist Michael Palmer, leaving a notable empty fourth corner in their practice room, it marked a transitory moment in the band’s acclaimed career, and one that would be cemented by events to come.

Entering 2020 as a trio with a handful of songs written and a small tour under their belts, the world around them came to a sudden halt. Yet despite the unquestionable hardship that the lockdown brought with it, for a band looking to rebuild following a dramatic change, it also proved to be a blessing in disguise.

“I guess it ended up being a lot more collaborative between the three of us,” Sean notes of their fifth studio record, ‘Enjoy The View’. Unable to meet in person, the album began to take shape across countless files bouncing back and forth between their respective Edinburgh homes. As well as providing the space to think more broadly about their own roles in the band, isolation also allowed them to approach their collective sound in new ways.

“If you’re trying to write a part when two other people are smashing their instruments it’s not the easiest thing,” Adam laughs. “Writing remotely, you could mute parts and work on things in your head. It just gave us a bit more creative freedom to try different things.” For Darren, separated from his kit, drumming became an entirely digital venture. “I could be a bit freer,” he notes, immediately backed up by his bandmates. “It was nice for Darren to have the space to try something he normally couldn’t,” Adam smiles, celebrating the opportunity for the trio to switch up their song writing process.

With the space to focus on the structure of the songs over what is immediately possible in a practice room, the band shifted gears. “We’ve always considered ourselves a live band more than a studio band,” Darren notes, explaining how the past twelve months have forced a change. “This was more about focussing on making a really great album rather than thinking about how we play it live. Let’s make an album that’s just slightly different for us.”

The result, ‘Enjoy The View’, is also the product of a more settled band. Fifteen years into their career, the trio are more focussed than ever. “We are doing this for ourselves and the people who like our music and get something out of it,” Adam gleams, “I’m really excited about being able to show them the new record.”

“I’ve had a really nice time writing this album,” he states matter-of-factly, signalling his appreciation to his bandmates. “We’re all very appreciative of the people who are still listening to us,” Darren adds, “it pushes us to keep getting better”. Nodding to both the band and their ever-loyal fans, Adam agrees. “It is very much our band, and we do this because we can do it together.”

After spending years as a major presence in Brooklyn’s thriving music scene, Frankie Rose relocated to her familial home of Los Angeles for 18 months. Frankie’s intent was to establish yet another moment in her storied indie rock métier. Gradually, she found herself short on sleep, funds and optimism. “I moved to L.A., drama ensued and I ended up on a catering truck. I was like, how can this be my life after being a touring musician and living off of music. I had really lost my way and I thought I was totally done.”


Through sleepless nights of listening to broadcaster Art Bell’s paranormal-themed archives, Frankie’s thoughts had turned to “who am I, I’m not cut out for this business, it’s not for me.” She continues, “I was literally in my room in L.A., not knowing how I was going to get out. But out of it all, I just decided to
keep making music, because it is what I love and what I do – regardless of the outcome.”
Towards the end of her time spent in Los Angeles, Frankie reached out to Jorge Elbrecht (Tamaryn, Gang Gang Dance, Violens) and began sketching what became the basic outline of what felt like a new album.Then, rather fortuitously, Frankie ended up back in Brooklyn with the realization that “in the end, I’m on
my own. I have to do these things on my own.”
The months that ensued meant basically working with no budget and finding ways to record in-between days. This time enabled Frankie to experiment musically with a variety of people that ultimately changed the way she worked. “I got a lot of input from people like Dave Harrington (Darkside), who was helpful
reconstructing the songs, adding dynamics and changing up the rhythms.”


The result of this existential odyssey is Cage Tropical, Frankie’s 4th album. It is awash with vintage synths, painterly effects pedals, upside down atmosphere and reverberating vocals. It evokes a new wave paranormality of sorts that drifts beyond the songs themselves. “My references aren’t just music,” says Frankie, “I love old sci-fi. They Live is one of my favorite movies ever, same with Suspiria. 80’s sci-fi
movies with a John Carpenter soundtrack, with silly synths – that makes it into my file, to the point that I’ll write lyrics incorporating that kind of stuff. It’s in there.”


Beginning with the shimmery, cinematic and percussive sparkling of the album’s opening track “Love in Rockets,” the song’s refrain of “a wheel, a wheel of wasting my life; a wheel, a wheel of wasting my time” immediately alludes to those darker circumstances that led to the creative origins of Cage Tropical. “It’s all essentially based on wh`at happened to me in Los Angeles and then a return to
Brooklyn,” says Frankie. “Misery turned into something good. The whole record to me is a redemption record and it is the most positive one I’ve made” 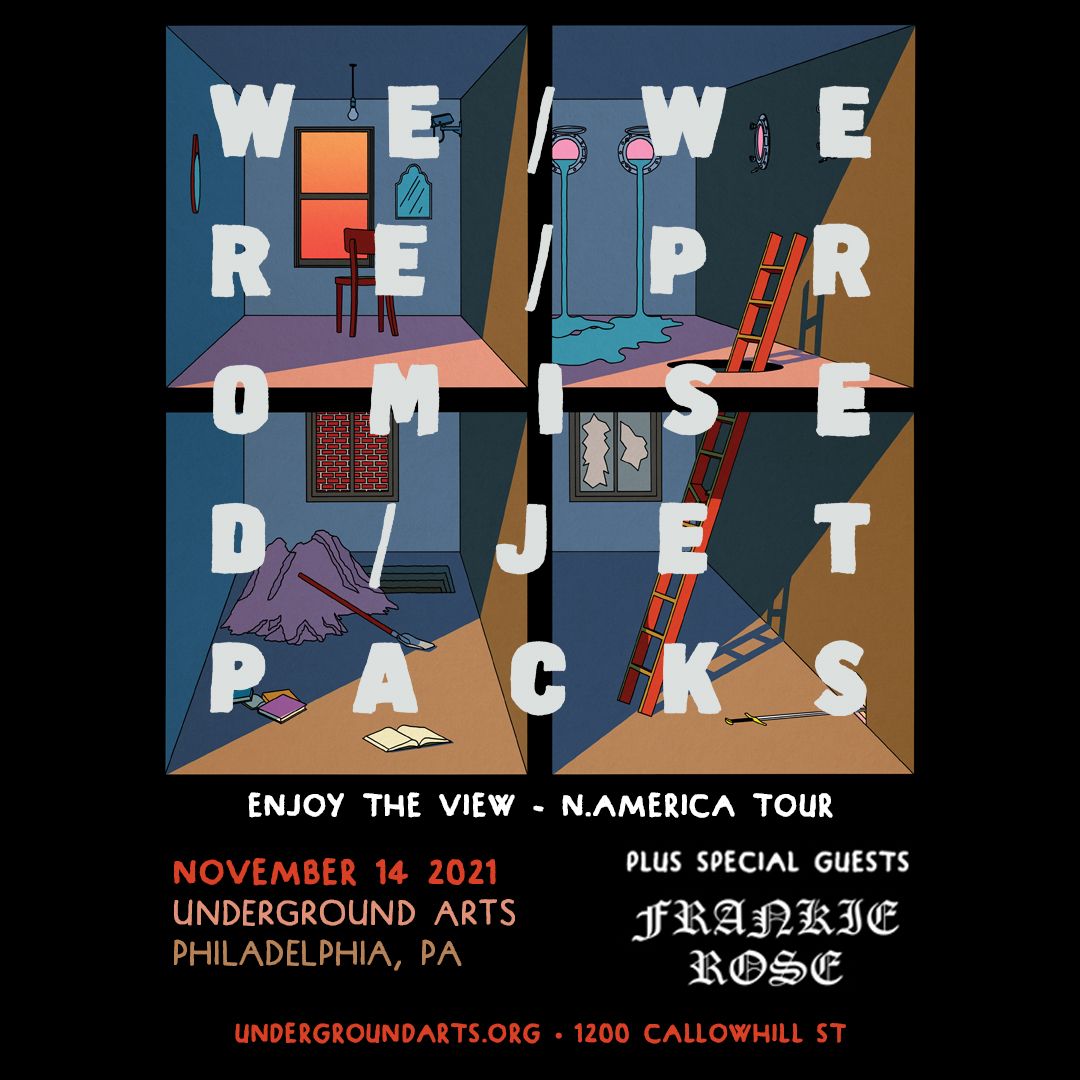