What So Not - Beautiful Things Tour, DUCKWRTH


All General Admission Tickets are Standing Room only

When What So Not rolled out a giant chrome horse on monster truck wheels during his headlining Coachella set last year, it was his boldest reminder yet that he doesn't play by the same rules as his peers. Now, with the arrival of his debut artist album, Not All the Beautiful Things, he's continuing to blaze his own trail, forging a complete vision for what is now much more than just a dance music project.

Over three years in the making, Not All the Beautiful Things is about transformation and metamorphosis, a culmination of everything the Australian-born artist behind such massive anthems as "High You Are" (50 million-plus streams), "Waiting" (with Skrillex and RL Grime), and his remix of RUFUS du Sol's "Innerbloom" (#30 on Triple J's Hottest 100 list for 2016) has been working towards as he's built his reputation as one of the most innovative producers in the game, garnering over 455 million combined streams (200 million on Spotify alone) in the process. More than an album, it's a fully realized artistic statement in which What So Not is in full control of every aspect, from the stage design and visuals to the music videos and merchandise. "I didn't want to put anything out that doesn't cohesively match the essence of the songs," explains the man behind it all.

To help represent the many moods and voices of the project, What So Not enlisted a small army of collaborators and guest vocalists, including Skrillex, Slumberjack, San Holo, Michael Christmas and legendary Silverchair frontman Daniel Johns, to name just a few. But perhaps the album's most head-turning collab comes on "We Keep on Running," which features rock supergroup Toto, whose classic track "Africa" What So Not has been dropping into his live sets for years. That their anthemic arena rock fits so seamlessly into Not All the Beautiful Things' epic orchestrations is testament to how far What So Not has pushed his sound.

Not All the Beautiful Things is What So Not's first release on Ninja Tune imprint Counter Records, which is co-releasing the album with his longtime label Sweat It Out, who have been with him since the beginning. "For me it's the best possible scenario," says What So Not. "Being such a fan of Counter and Ninja Tune for so many years, to be alongside acts now like Odesza and Bonobo and be part of that roster is very exciting."

As much of a creative leap as Not All the Beautiful Things represents as an album, What So Not promises it's just the beginning of what fans can expect from this exciting new phase of his evolution, as the artist who's already co-headlined with Baauer and A-Trak and headlined festival stages from Coachella to Pukkelpop to HARD Summer looks ahead to his 2018 touring schedule. "We're creating this entire world that people can step into," he says. And whether that world will still feature a giant chrome horse - well, fans, will just have to wait and see. 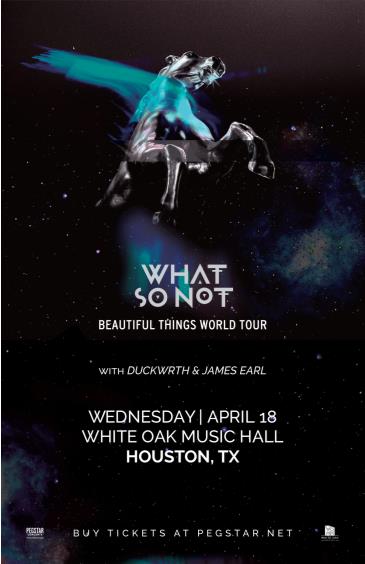 What So Not / Duckwrth / James Earl