Wild Rivers---10pm
website   facebook   instagram   twitter   youtube
Indie trio Wild Rivers effortlessly blend exquisite harmonies with impassioned songwriting and bring it all to life with a captivating live show. Their wistful new single “Amsterdam,” co-produced by Peter Katis (The National, Interpol, Sharon van Etten) and Wild Rivers, offers a first taste of what listeners can expect from their anticipated full-length album, details forthcoming.  “’Amsterdam’ is the retelling of a friend’s breakup, who had big plans to move to Europe to be with her long-distance boyfriend,” explains co-lead vocalist and songwriter Khalid Yassein. “One day, out of nowhere, he called it all off over the phone. I imagined all the things she had been looking forward to, and I started writing a song from her perspective. Your early 20s are such a hard, transitional age. You’re coming out of your youth and strewn into the real world, and it’s sink or swim. Oftentimes, you make plans and envision this reality that doesn’t pan out as you expected, and that type of devastation felt like a really raw and relatable emotion that I wanted to draw from.”  Wild Rivers first caught attention with their 2016 self-titled debut, followed by their acclaimed EPs, 2018’s Eighty-Eight and 2020’s Songs To Break Up To, which all combined have earned the band 200 Million streams. Having supported artists like The Paper Kites, Donovan Woods and Jake Bugg, Wild Rivers has built a dedicated live following thanks to their charismatic stage presence as evidenced by sold out headline shows across North America, including major cities like New York, Denver, Chicago, Atlanta, Toronto and more.  Wild Rivers is Khalid Yassein [guitar, vocals, keys], Devan Glover [vocals, bass], and Andrew Oliver [lead guitar, bass]. 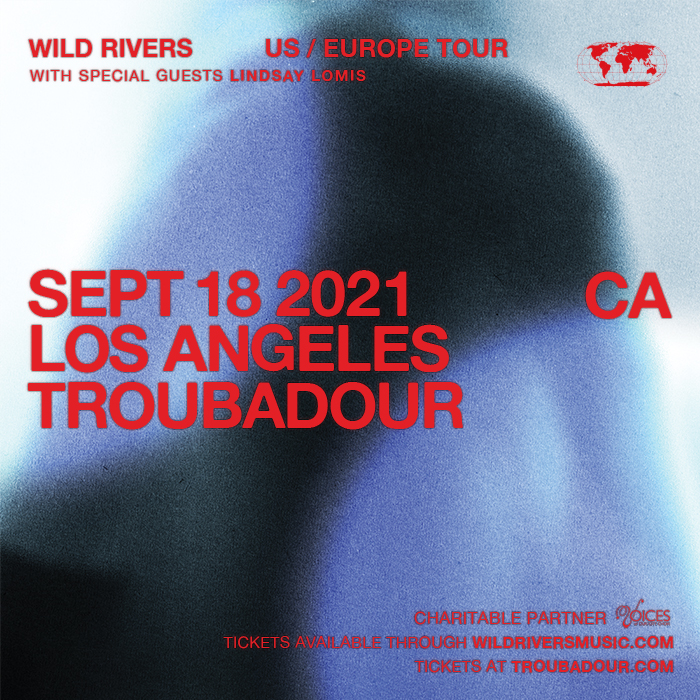