Will Atkinson is a household name known for experimenting with a variety of genres and providing eclectic sets at stages around the world. Despite being well known for his talent in the Trance genre, Atkinson refuses to conform or pigeon hole himself into one style of music. He likes to experiment with Techno, Electronica, Progressive House and more and his recent single “Pat Butcher” has generated over 1.6 million views and he has over 6 Beatport number 1 singles under his belt. He has released music from some of the biggest labels in the past, such as Subculture, FSOE, Spinnin’ Armada, and Vandit.

Dutch producer Richard Durand will be hitting the stage along with Will Atkinson. “The Air I Breathe,” artist will be delivering trance bangers from start to finish. Fellow Dutch producer RAM and Kane Michael will be kicking off the night. This is one you won’t want to miss! 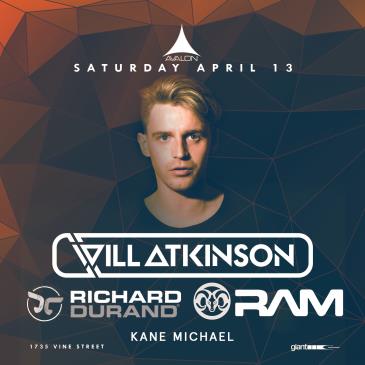