The Beatles, the Blues Boom and Psychedelia had made their impact on Classic Rock and the creative possibilities were infinite. Pioneering the use of twin lead guitars, WISHBONE ASH jumped on board in 1970, opening for Deep Purple. Andy Powell jumped up with Ritchie Blackmore at soundcheck and Ritchie loved it and recommended them to MCA which led to their first, self-titled album later that year. The band quickly began headlining in arenas, stadiums and festivals throughout the world. Taking full advantage of the fertile musical environment, they produced a distinctive brand of melodic rock, readily apparent on such works as “The King Will Come/Throw Down The Sword/Warrior”, “Lorelei”, "F.U.B.B.". “Phoenix” and “Blowin' Free". “Rest In Peace”. Power and melody have made the Ash a hard act to follow, while they are currently being discovered by new generations of loyal music fans.

The band includes founding member Andy Powell, who handles lead vocals and trades licks with Yorkshire's Mark Abrahams. Bassist Bob Skeat, a 20-year veteran of the band, keeps the bottom rocking with Joe Crabtree, one of the best of Britain’s new breed of drummers whose performance credits include Pendragon and David Cross of King Crimson.

With 24 studio releases, 12 live albums, 10 compilations and five live DVDs to date, Wishbone Ash continues to prove they are not a band to rest on their laurels. Wishbone's third album, Argus (1972), was named The Best British Album of the Year by Melody Maker and considered to be one of the all-time classic rock albums, together with Pilgrimage(1971) and New England (1976). More recently, The Power of Eternity (2007), Elegant Stealth (2011) and Blue Horizon(2014) garnered enthusiastic praise from pundits and punters worldwide. The band's biggest seller, Live Dates (1973), is one of the highly rated live albums of the 1970s. The latest musical project is Wishbone Ash: The Vintage Years (Snapper Music), a 32-CD deluxe box set spanning the years 1969 to 1991, featuring a coffee table book, posters, floppy discs, rare photos and more.

The constant of WISHBONE ASH has been ANDY POWELL, voted into the Ten Most Important Guitarists in Rock History (Traffic magazine, 1989) and the Top 20 Guitarists Of All Time (Rolling Stone). Through the years, he has been featured in notable publications, including Guitar Player, Vintage Guitar and Guitarist, and has appeared at the Guitar Institute in Los Angeles. In 2015, he released his musical memoir, “Eyes Wide Open: True Tales of a Wishbone Ash Warrior” (co-written with Colin Harper, Jawbone Press) which offers an inside track of five decades of life on the road and in the studio. Best of all is what they do LIVE! 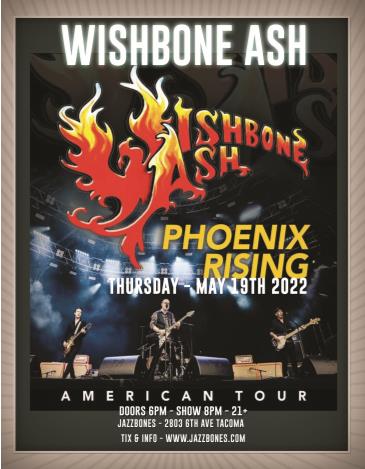