Professional Photos taken and uploaded after the event to find and tag yourself in singing along to the timeless classics of these awesome female fronted bands.

About the Non-Profit: Women in Music is "the industry's leading non-profit working to advance the awareness, equality, diversity, heritage, opportunities, and cultural aspects of women in the musical arts through education, support, empowerment, and recognition."More information here: https://www.womeninmusic.org/
About the Bands: Cherry Bomb: A Tribute to the Women of RockIs Texas's premiere tribute to the Women of Rock who have blazed a rock 'n' roll trail scross the Southwest, blowing minds, melting faces, and capturing hearts!
Trees Marie & the Heavy Hearts: Trees Marie is the front-woman of Texan Native alternative-rock band, "Trees Marie and the Heavy Hearts." A high energy singer-songwriter referencing alternative rock, country, and folk roots with focus on social issues, romance, and reflection of self

The Battle of Evermore: A Led Zeppelin Tribute Experience This female fronted super group transports audiences to right back to the golden era of 1970's classic rock with powerful vocals and a huge = stage presence!
Lindsey Kate:Singer / Songwriter, Nashville recorded artist from Texas with a soulful sound well boyind her years performing tribute performances to artists from the 60's, 70's, 80's, 90's, to present along with heartfelt originals!
Remy Reilly:Singer Songwriter Remy Reilly creates music with deeply persona lyrics and soul-pop vocal performances. Her confident presence and humble, bright-eyed ambition gives her a prominent place in the Dallas music scene. 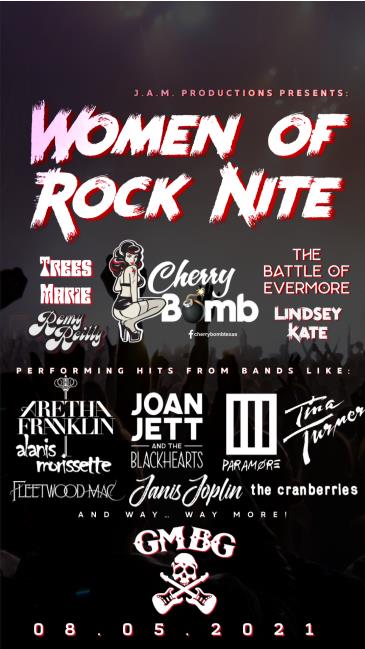