Prolific Bay Area musician Wyatt Smith has been steadily churning out lo-fi indie rock and playing shows in the Bay Area and Santa Cruz local scene since late 2017. Wyatt Smith has gone on two west coast tours and has played with artists such as Young Jesus, Justus Proffit, Sports Coach, Ancient Pools, Poppies, and Toner. You can listen to their music, including their October 2020 album "Full Circle", on Spotify: spoti.fi/2qaEa0i

with HEAR IN COLOR
Hear In Color is an alternative/indie/shoegaze group from the East Bay. Originally formed at Diablo Valley College in 2019, the band has released 5 singles and put out their debut EP entitled Last Thoughts back in February. The group consists of:
Faith Donithan - Lead VocalsGerardo González - Keys/Guitar/Backing VocalsElias Lozano - Bass GuitarIsaiah Selva - Guitar/Keys/Backing VocalsValente McNamer - Drums
Music all other things:https://linktr.ee/hearincolor
and QUARBAE

Quarbae is an Oakland-based folk fusion band with rock, jazz, and bluegrass influences. Their unique combination of musical backgrounds and instruments, including banjo, saxophone, and electric bass, lends itself to a raw, intimate, and often dance-inducing sound. Started in a backyard between pod mates over the pandemic, they've just finished their first album (out soon!). This will be their last local show before heading out on tour around the Southwest US. You can check out a recording of their live stream performance here: https://fb.watch/v/16dY9aBdO/Sarah Wolley - vocalsGabriel Szilardi-Tierney - banjo, acoustic guitarJonathan Ruchlis - saxophone, electric wind instrumentMichael Habib - electric bass, acoustic guitarJake Soussa - drums 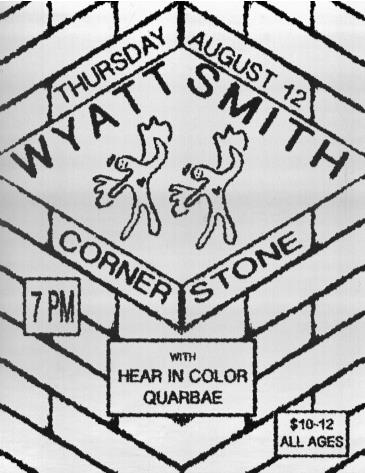