Yellahammered is a live comedy event complete with world-class stand-up comedians, local cuisine, and the fellowship of friends and family. Started in the summer of 2014 in Los Angeles by Alabama natives Wes Van Horn, Rivers Langley and Joe Raines, it quickly became one of the most talked-about live shows in town, featuring appearances by Roy Wood Jr, Nate Bargatze, Iliza Schlesinger, Kyle Kinane, Karen Kilgariff, Rory Scovel & many more!

On December 22nd, the boys are bringing their show and some incredible special guests to Saturn for an amazing night of food, fun, and frivolity. That's a delicious dinner and hilarious show for only $15! Food is served at 7pm. Show starts at 8pm.

Yedoye Travis is a stand up comedian, actor, and writer from Atlanta, GA. His half-hourComedy Central special Bury Me Loose was released earlier this year and he was featured inEPIX’s stand up series Unprotected Sets in 2021. Yedoye was also the creator of the Dark Tankpodcast, which AV Club called “one of the most deliciously daring shows of the moment.”Named a New Face at the Montreal Just For Laughs festival in 2017, Yedoye has since headlinedfestivals around the country and appeared on NBC, TBS, CBS, and Netflix and written for DCComics, MTV, IFC, Viceland, and Crunchyroll. His debut album, OK, produced by ComedyDynamics, was released January 2018.

Shaunak Godkhindi is an Atlanta comedian who performs all around the country. A featuredperformer at SXSW, High Plains Comedy Fest, Laughing Skull Fest, Red Clay Comedy Festival,and New South Comedy Fest, Shaunak has opened for Kyle Kinane, Rory Scovel, JoeZimmerman, Nore Davis, Sean Patton, Aakash Singh, and many more. His comedic style is fun,spontaneous, positive and silly! He once made a lady laugh so hard she peed a little and sheemailed him after the show saying that her night was ruined. The second season of his web seriesI’ll Take It was released earlier this year.


Wes Van Horn (CMT, Playboy.com, Upstairs Comedy Series)Wes Van Horn is a stand-up comedian and writer who has been seen on The Josh Wolf Show onCMT, as well as a featured performer at High Plains and Red Clay Comedy Festivals. He’sopened for such acts as Nate Bargatze, Kyle Kinane, and Iliza Schlesinger. He has been featuredon This Is Alabama, Playboy.com, and hosts his own stand-up show, The Upstairs ComedySeries at Avondale Brewing Company, which brings touring national headliners to Birminghameach month.


Rivers Langley (The Goods From The Woods, Funny or Die)Rivers Langley is a stand-up comedian and podcaster based out of Los Angeles. Since movingfrom the great state of Alabama in 2012, Rivers has become the host of the popular podcast, TheGoods From The Woods, and could be seen on Food: Fact or Fiction hosted by comedy legendMichael McKean on The Cooking Channel. The co-producer of many hit stand-up showcasesthroughout Los Angeles, he’s also a member of the sketch group, Hush Money, who has beenfeatured on Funny or Die. 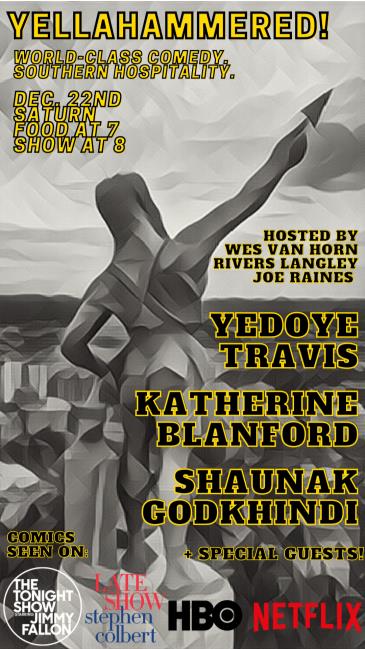