Electric Palms at The Republik

Zomboy is Joshua Mellody, asound engineer whose aggressive, bloodthirsty tracks range from stadium­ readydubstep to drum'n'bass and electro ­house. Born in a small town near Cornwall,England called Penzance, Mellody came to America, where he worked in recordingand engineering before returning to the U.K. After releasing some electrotracks ­­ mostly cover versions ­­ under the name Place Your Bet$, Mellodymoved back to Guildford, U.K., put his love of Skrillex and Rusko into hiswork, and became the dubstep artist Zomboy, the name inspired by the video gameLeft for Dead.

He kicked life off as Zomboy in 2011 with the Game Time EP,released by the label Never Say Die. With the EP spending eight weeks as one ofBeatport's Top Five dubstep releases, Zomboy charted next to his idols on theonline music retailer's charts, and by the end of the year, his music andremixes were licensed to compilations on labels like Warner and Ministry ofSound. The Dead Symphonic EP followed in 2012, and single "Kick It"appeared the same year. 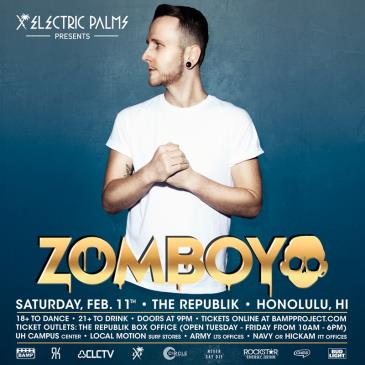