With their nuanced songwriting and inventive sensibilities, flor use their songs to explore feelings of longing and heartache, anxiety and self-doubt. On their debut album come out, you're hiding, singer/guitarist Zach Grace, bassist Dylan Bauld, guitarist McKinley Kitts, and drummer Kyle Hill alternately magnify and brighten those feelings by dreaming up an intensely cinematic take on synth-driven alt-pop. But for all its transportive melodies and triumphant mood, come out, you're hiding was born from a place of painful vulnerability.  "Making this album has really been about me coming out my shell and getting over whatever block I have about letting people know what's going on in my head," says Grace, who serves as chief lyricist for the L.A.-based, Oregon-bred band. "A lot of people probably struggle with believing in themselves that way, and the album's a testament to overcoming that."

Mostly recorded in Bauld's bedroom studio, with its title nodding to Grace's reclusive tendencies, come out, you're hiding achieves its intimate feel thanks partly to a process that flor adopted soon after moving to L.A. "I'd started experimenting with different production styles, and I ended up coming up with these sounds that weren't anything like what we'd done before," recalls Bauld, flor's main producer. "Ever since then, I'll make a basic track and take it to Dylan, and he'll build it from there," adds Grace. "Starting out on my own makes writing a little easier," he continues. "I can get it all out in a very journal-like way, and then pull back and process things a bit before putting it all out into the world."

Not only essential in instilling come out, you're hiding with unfettered honesty, flor's creative approach has shaped their singular sound. Mixed by Andrew Maury (Atlas Genius, Panama Wedding), come out, you're hiding infuses its crystalline textures with the heavy guitars and fierce drumming that flor's long brought to their live show. "We used to hold ourselves back and try to keep it simple, but now we're doing whatever we can to make these big moments within our songs," says Bauld, who's also produced records for such artists as Halsey.

With its airy beats and soaring melodies, "Guarded" starts off come out, you're hiding by offering a confession of insecurity. "‘Guarded' is about building up this castle around me and having it torn down, and trying to deal with losing that feeling of comfort," says Grace. On "Where Do You Go," shimmering guitar tones match the song's tender romanticism. "It's about a couple with this unspeakable joy about them," explains Grace. "It's asking, ‘Where do you go to find love like that?', because it's so undeniably special." Also on come out, you're hiding, flor bring their dreamy introspection to songs like "Overbehind," whose determined self-assurance makes for a sublimely uplifting closing track.

Growing up in the tiny town of Hood River, Grace, Bauld, and Kitts first created music together as teenagers. Once they'd brought Hill into the fold and begun making their name as a captivating live act, the band pushed forward in their career by relocating to L.A. Taking on the name flor-a word that translates to flower in Portuguese-the band soon landed a deal with Fueled by Ramen, who released their debut EP Sounds in February 2016.

Despite his initial shyness about sharing his lyrics on come out, you're hiding, Grace says he's ultimately emboldened by flor's lavish arrangements. "As soon as my lyrics are in the songs and they've got that beautiful production on them, I love that people are learning who I am and what flor is about," he notes. "Hopefully they're finding something in it to make them feel some kind of companionship-like we're all going through these things together." 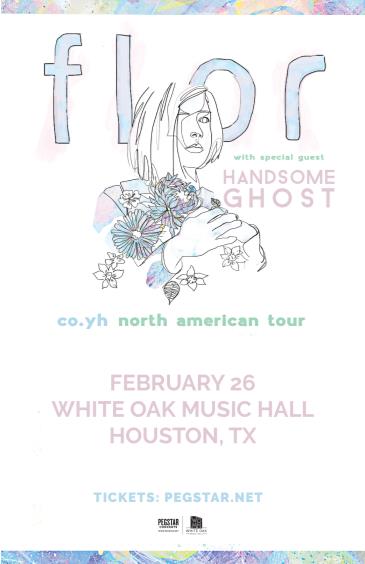