A critical and commercial sensation in their home country of New Zealand, Kiwi five piece SIX60 continuously break records for ticket sales, chart-topping albums & singles and new innovative ways of getting their music to their fans. But outside of their antipodean environs, they were less well-known. That is, until a string of concerts last year changed the band’s trajectory on the global stage forever. The nationwide tour known as ‘SIX60 Saturdays’ culminated in the band playing to over 50,000 people at Auckland’s Eden Park Stadium - and they were the only band performing live to crowds anywhere in the world at the time.

During the earlier stages of the pandemic, New Zealand found itself for a time in the enviable position of almost zero cases of Covid-19 while the rest of the globe was in lockdown. This meant that Kiwi’s national band, SIX60, were now “The World's Biggest Live Act”, according to Billboard. Within days, the band were seen across news screens and papers throughout Europe, Asia, Africa and The Americas. They were featured on live TV, radio and press across the globe: BBC News highlighted that the shows are “just unimaginable right now - the rock band SIX60 are out every weekend playing to thousands of fans” in their extended segment on the band, ITV’s Good Morning Britain also featured the band, with then-presenter Piers Morgan citing them as “the hottest band in the world right now”. NME featured the band, interviewing Matiu for a feature which noted that the band are “currently the planet’s biggest touring band”, and CLASH Magazine reviewed the show - the only live music review on the planet at the time: “SIX60 are riding high and don’t look like they’ll be stopping any time soon”. In a lead interview in The Telegraph newspaper, the band’s show at Auckland’s Eden Park stadium was named ”the biggest gig since Covid began”. The show was the most-shared entertainment story in the world that week - despite taking place the same weekend as The Oscars.

But SIX60’s beginnings were far more humble than you might imagine for a multi-platinum selling stadium band at the centre of a worldwide media frenzy. Friends first through university and playing in local Rugby sides, the 5 boys began jamming out covers of New Zealand roots songs and covers of bands such as Fat Freddy’s Drop and Trinity Roots, before playing shows at college parties, developing a devout fan following. Walters recalls of their quick rise to success: “Then we booked out some time in a studio - not much time as I remember it - and went in there with a box of beers and went through everything, and made a record. We put it on Facebook and the next day - it just blew up.” They have since released three studio albums - all of which shot to number one in the album charts, spawning countless number one, multi-platinum singles too.

SIX60 have a composite sound which is borne of all the many influences - both musical and personal - each member brings with them. Bassist Chris Mac, brought up solely on classical music such as Beethoven and Chopin, had his musical awakening upon hearing punk for the first time: “Dead Kennedys, The Sex Pistols and proto-punk like Costello: this was music that made me feel for the first time - feel something more than just skill and technique”. Mac’s Jack Beadle PR Music & entertainment communications classical and punk influences are met with a love of The Beatles and Kiwi roots/reggae bands in keyboardist Marlon Gerbes - but then other members of the band share a love R&B, soul, funk, hip hop - even drum & bass. This wide range of influences is reflected in the band’s material: early mega-hit ‘Don't Forget Your Roots’ is a sundrenched, laid back reggae-tinged number, but live favourite ‘Sundown’ combines electronic sounds and syncopated afro rhythms to create a hybrid R&B pop sound. “It’s important to keep pushing...otherwise we get bored”, says Walters - “We find ourselves having a sound, but it’s this combination of where each of us came from. It just happened naturally”. However, all has changed since SIX60’s last album. The world is a different place, the band are reunited after being apart for so long, and Walter is a new father. With a new sound and a new perspective, the band have chosen to record their forthcoming album ‘Castle St’ with a back-to-basics approach: all together in the studio, making music as they did when they first formed as a college band in their student house at 660, Castle Street. Forthcoming album ‘Castle St’, due out October 7th, hails back to the band’s early days: the album title and cover artwork both refer to the place where the band first met, formed and performed.

The album will feature 10 brand new tracks including new single ‘Before You Leave’, out now. Of the new album, Matiu says: “We are very excited to share the new music, give over the single and get everyone ready for a new album. Our music never really feels finished until it's been experienced by our fans. Some of the early feedback we have gotten is about how live the new music sounds. That's really a product of how we made it. The lockdown that cancelled the last tour really forced us to spend significant time away from each other for the first time in a long time, so when we finally got back together it almost felt like being a new band again and we wanted to showcase each individual and what it means to be a band. This isn't the kind of music you can make by yourself in your bedroom. It won't just be our instruments you hear on the upcoming music, but all our vocal harmonies and BVs were done by the band as a whole. It really lets you feel the breadth and spirit of SIX60. An album that is real takes a lot of love and trust by the people involved and adding our fans into that circle is a really exciting next chapter.”

This love and trust is what has kept the band down to earth - and so likeable - for all these years, despite the huge success, awards and fame. Chris Mac reflects on this: “Look - we are 5 people all with our own backgrounds and our own shit...you can’t love each other all the time! But the moment you walk on that stage together, you have ultimate trust.” Matiu adds to the sentiment, suggesting the band identifies as much with a sports team as a band: “our mentality is to keep pushing ourselves to see how high it will take us. And we won’t stop going until we can’t go any further - We’re here to be The Shit!” SIX60 are Eli Paewai (drums), Chris Mac (bass), Ji Fraser (lead guitar), Marlon Gerbes (keyboards) and Matiu Walters (vocals, guitar).

Colorado born-and-raised 21 year-old Gabe James is a rare talent - his guitar playing and lyrics fill a whitespace in his generation’s music giving him the potential to be a gen-Z John Mayer. Before even graduating high school, Gabe James was discovered by Gabe Saporta who immediately signed him to T∆G Music because of his extraordinary talent, but mostly because he had the perfect first name.

In 2020, with no music out, Gabe was able to build his following from 300 to over 100K, creating a demand for his music before it was even finished. In May he released his debut EP, A Boy from Colorado which introduced the world to Gabe as we met him and has since seen over 1M+ streams. Gabe struck another social chord last summer when flipping Olivia Rodrigo’s “good 4 u” on TikTok. Fans demanded it be put on DSPs and since then, Gabe has seen even more social and streaming growth. On 12/1, he released his follow-up EP, The City of Lost Angels, featuring his latest single "FLICKER" that debuted on Spotify's "The New Alt" + more. Influenced by Damien Rice, Chet Faker, John Mayer, Coldplay and The 1975. Besides being an absolute shredder, Gabe's other strengths include melody and lyrics. 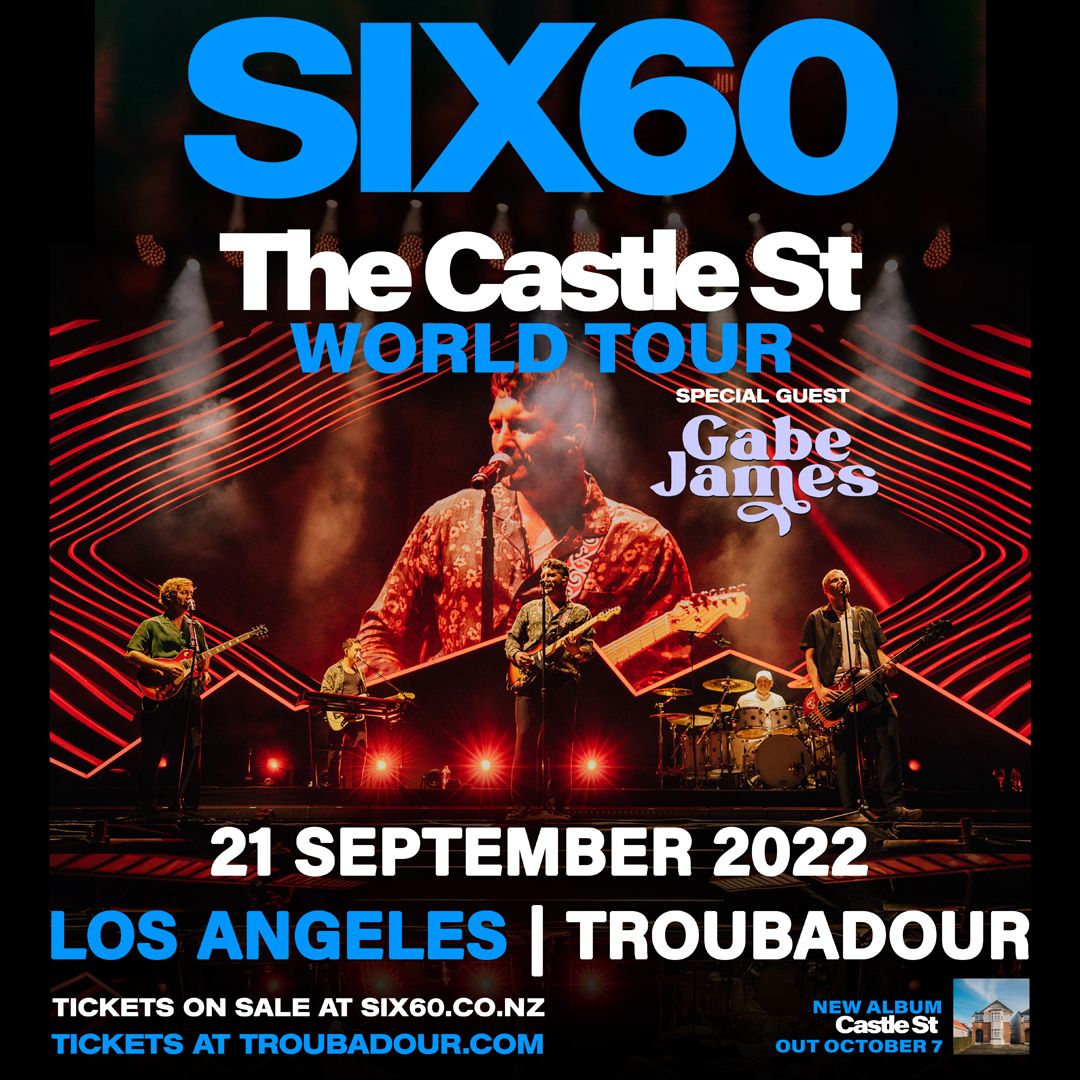